Home > Tour > Pilgrimage > Journey to the heart of sacred India, from Ujjain to Varanasi

Journey to the heart of sacred India, from Ujjain to Varanasi

Journey to the heart of sacred India, from Ujjain to Varanasi 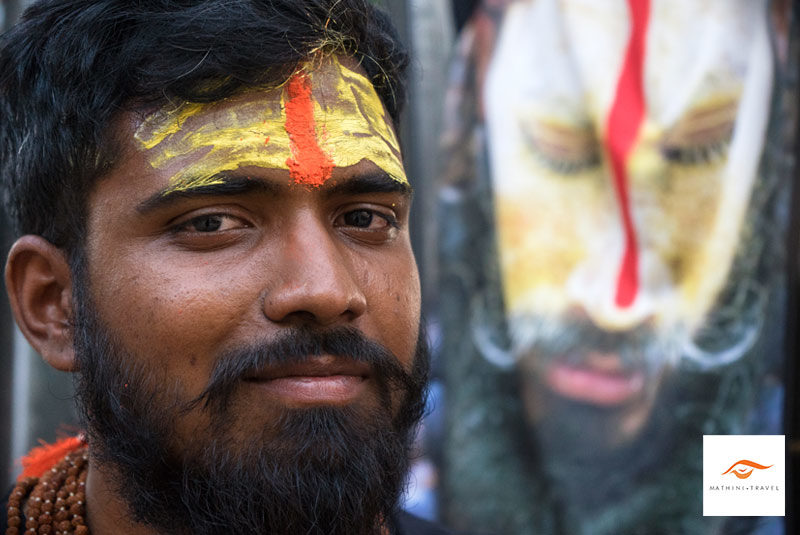 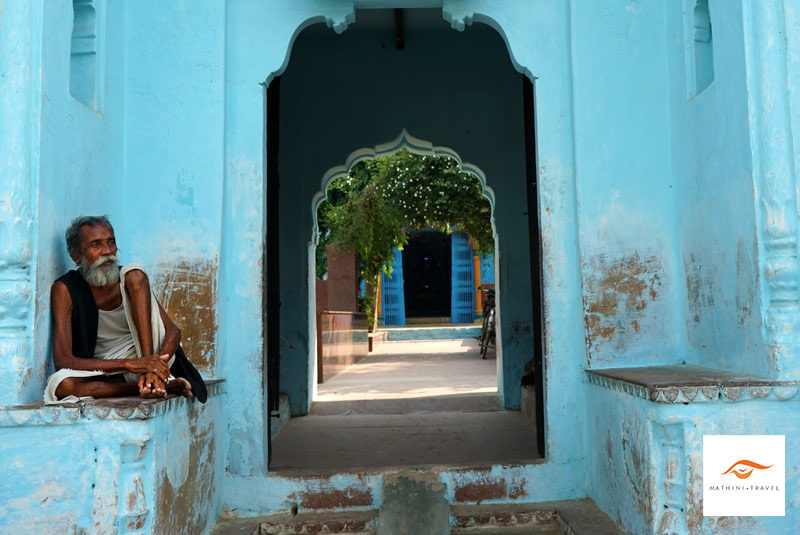 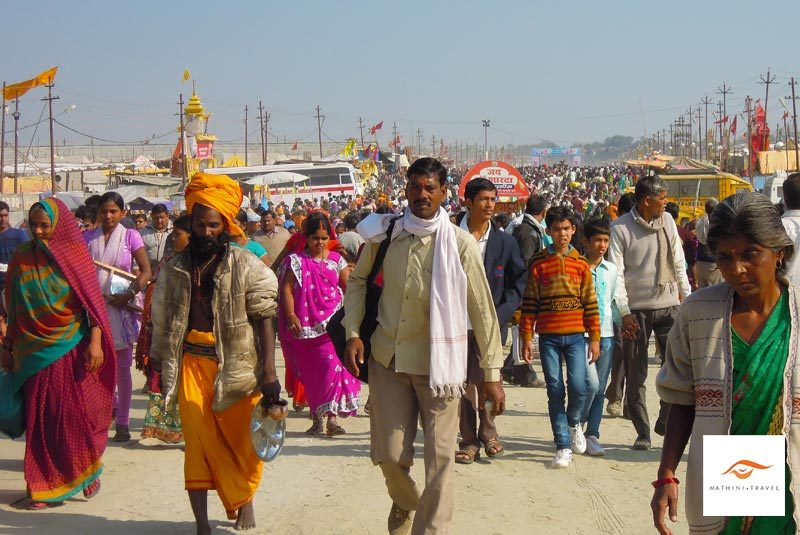 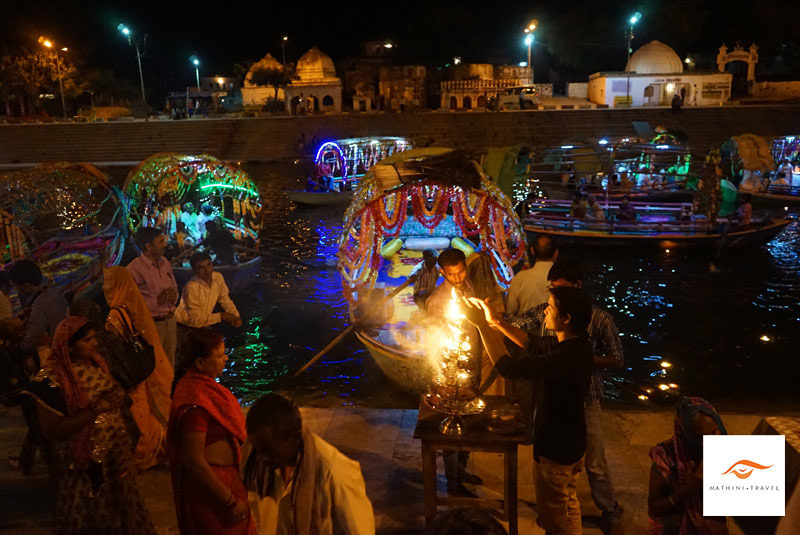 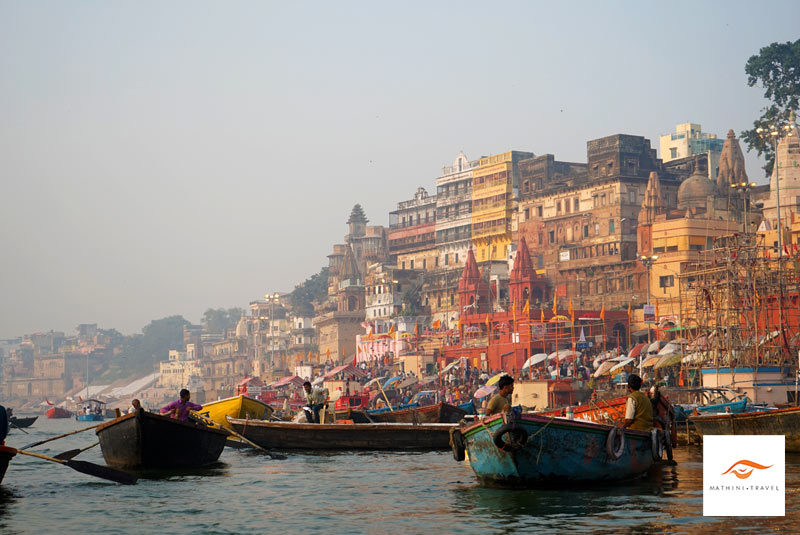 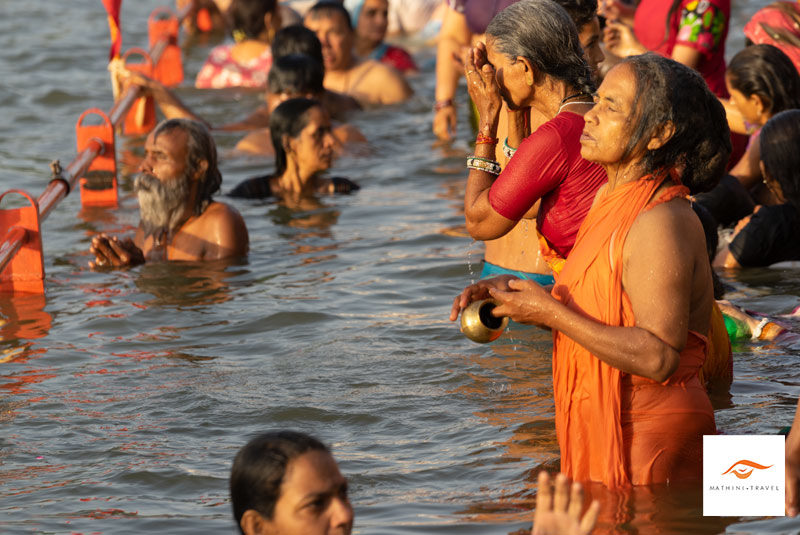 This 12-day trip offers you a dive into mystical India, from Ujjain in Madhya Pradesh to Varanasi, the spiritual capital of India, in Uttar Pradesh.

From Indore, we will visit Ujjain, which hosts in turn with Allahabad, Haridwar and Nasik, the Kumbh Mela, the largest spiritual gathering in the world.  Ujjain is also home to one of the twelve ‘jyotir lingams’ or ‘lingams of light’, the symbols of the god Shiva.  We drive to the south of Indore where there is a second ‘jyotir lingam’, that of Omkareshwar.  From Indore, the trip will continue eastward with a stop at Bhopal and its great mosque built by one of the Begums (Muslim queens).

From Bhopal, we head to Sanchi, one of the oldest Buddhist centres in India.  Continuing further east and we will stop in Khajuraho, made famous for its majestic temples built during the Chandela dynasty, some of whose frescoes have Kama Sutra scenes.  The next stage will take us to Chitrakoot, a city still little visited by foreign travellers, however, an important place of pilgrimage for Hindus.  It is said that Lord Rama spent 11 years of his 14 years of exile there.

Our last step is Varanasi, the eternal city of Shiva, a unique, one of a kind city, with the most sacred as its heart. 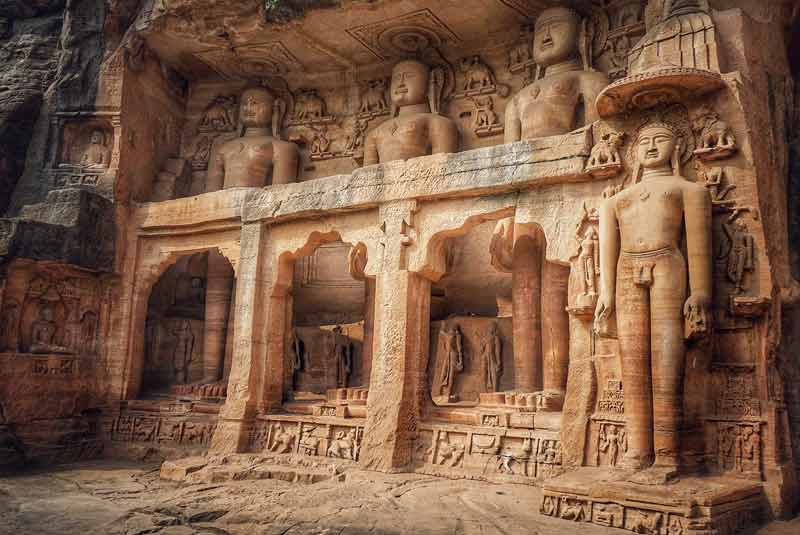 Great heritage tour, from the Taj Mahal to Bhopal €1100

Great tour of the most famous sites of Madhya Pradesh: Gwalior, the pearl of the east, Orchha city of the Bundelas kings, Khajuraho and its splendid 'sensual' temples, Sanchi one the oldest Buddhist sites of India and Bhopal, city of the Begums.
11 jours 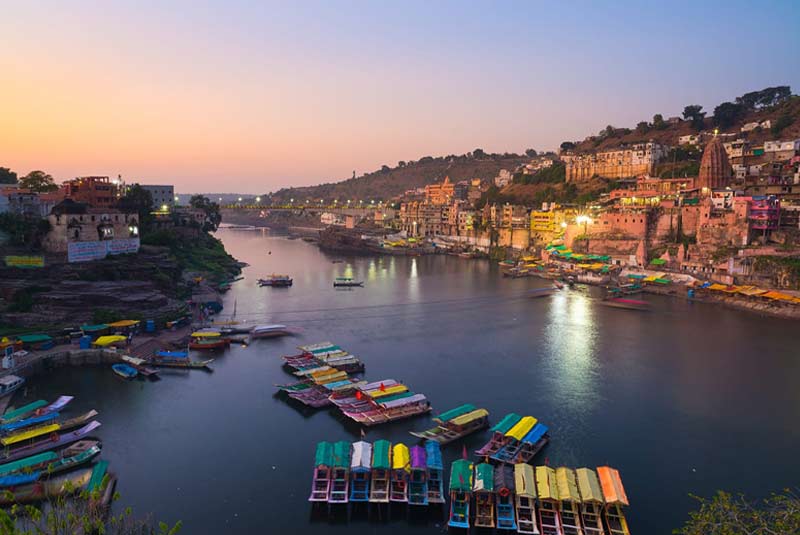 Journey to the heart of sacred India, from Ujjain to Varanasi €1300

Immersion in sacred India, from Ujjain (Madhya Pradesh) to Varanasi (Uttar Pradesh) via Bhopal and its great mosque, Sanchi and its ancient stupas, Khajuraho and its 'sensual' temples and Chitrakoot, city of Lord Rama's exile.
12 days
Day 1

Namaste! We welcome you warmly at the Indore airport and drive you to your hotel. Overnight in Indore.
Day 2

After breakfast, we leave for Ujjain located on the right bank of the Shipra, one of the tributaries of the Ganges. Ujjain is one of the seven highest places of Hindu pilgrimage ('Sapta Puri') and rightly so: the city houses 'Mahakaleshwar', the lord of time or death, one of the 12 'jyotir lingams' or 'lingams of light'. It is also the dwelling of the Hindu goddess Harasiddhi, one of the 51 Shakti Peetha. After visiting these sacred places, we will return to Indore where we will visit the Rajwada, the seven-story palace of the Holkar kings and the Kanch Mandir, an amazing Jain temple adorned with mirrors and floor-to-ceiling mosaics. A real gem. Overnight in Indore.
Day 3

After visiting the Bada Ganapati Temple, which houses a huge 8m high colored statue of the Hindu god Ganesha, we will leave for Omkareshwar, which is home to the 'Lord of the Om', one of the twelve 'lingams of light'. The Narmada River that flows to Omkareshwar splits in two and forms an island called Shivapuri. This island have the shape of 'OM' (ॐ), the Hindu symbol, hence the name of Omkareshwar. We will visit the two most important temples of the city, Omkareshwar and Mamleswar and we will walk in the bazars of this holy town. Perhaps you will be tempted to buy a 'banalingam', a variegated stone of oval shape considered sacred by Hindus. We return to Indore and, depending on the time available, we will visit the Lal Bagh Palace of the Holkar rulers. Overnight in Indore.
Day 4

Departure for Bhopal, the capital of Madhya Pradesh. In the afternoon, we will visit the mosque 'Taj-ul-Masajid' meaning literally 'the crown among the mosques'. It is one of the largest mosques in Asia. Then we will go for a short walk in the city. We will pass the Gohar Mahal, the pink palace of Begums, now converted into a cultural center. In the afternoon, we will leave the city to visit the temple of Bhojeshwar, which houses a lingam of more than 2 meters high, one of the largest in India. Then we will drive to the World Heritage Site of Bhimbetka, which contains 28,000-year-old cave paintings. Overnight in Bhopal.
Day 5

We leave for Sagar. On the way, we will stop in the village of Sanchi, famous for its splendid Buddhist monuments dating back to the first century BC. There are fifty monuments on the hill of Sanchi, including the great stupa built by Emperor Maurya Ashoka, and several temples in ruins. Arrival in Sagar at the end of the day. Overnight in Sagar around the lake.
Day 6

After visiting the temples of Sagar, we will go to Khajuraho and its splendid temples of the Chandela dynasty known worldwide for their 'sensual' frescoes. Overnight in Khajuraho.
Day 7

We arrive at Chitrakoot for lunch. This pilgrimage town vibrates to the sound of 'Ram Ram, Sita Ram' mantra. Legend has it that Lord Rama, his wife Sita and his brother Lakshmana lived for eleven and a half years in exile in the thick forests of Chitrakoot. In the late afternoon, we will visit the 'Ram Ghats' as well as several ancient temples along the Mandakini River. At sunset, we will board on small boats to attend the evening arati (ritual of flames) on Ram Ghat. Overnight in Chitrakoot.
Day 9

Chitrakoot, the exile of Lord Rama

We continue our visit of Chitrakoot. We will first go to Kamadgiri. In Sanskrit, Kamadgiri means 'the mountain that fulfills all wishes'. It is a place of great spiritual importance for the Hindu faithful. Rama, Sita and Lakshmana stayed at that very place during their exile. We will perform the parikrama (circumambulation) of 5 km around the hill. In the afternoon, we will visit Gupt Godawari, an original temple located in the bed of a stream; we will have to walk in the water through narrow corridors dug into the rock to reach a small temple dedicated to Rama. Depending on the time available, we will also visit the temple of Hanuman Dhara devoted to the monkey god. Overnight in Chitrakoot.
Day 10

Departure for the last leg of this tour in sacred India, and what a step! The divine and unique Varanasi, spiritual capital of India. On the way, we will make a stop at the 'Triveni Sangam', in the city of Allahabad, the confluence point of the Ganges, the Yamuna and the mythical Saraswati. Arrival in Varanasi in the late afternoon. Walk on the ghats. Night in a hotel overlooking the Ganges.
Day 11

We will begin the visit of Varanasi with a boat trip on the Ganges at sunrise, a pure delight. Then, we will visit the old city and its Kashi Vishwanath temple, the most revered in the city because it houses one of the 12 'jyotir lingams' or 'lingams of light'. Next door is the Annapurna Temple dedicated to the goddess of abundance. She is the supreme female deity of Varanasi. We will then head to the 'Lalita Ghat' and come across a Nepali-style temple, a curiosity in Varanasi. It was built 170 years ago by the king of Nepal Rana Bahadur Shah. In the evening, we will make another boat ride on the Ganges to observe the cremations held at the Manikarnika Ghat and to attend the ceremony of the arati at the ghat Dashashwamedh. Night in a hotel overlooking the Ganges.
Day 12

Varanasi, the eternal & Sarnath, place of the Buddha's first sermon

Continuation of the visit of the important temples of Varanasi: Kalbhairav, Durga Monkey, Sankat Mochan Hanuman and the Baratha temple, which houses a relief map of India carved in marble representing the goddess 'Bharat Mata' personifying India. In the afternoon, we will leave for Sarnath, one of the highest places of Buddhism: there the Buddha would have pronounced his first sermon after attaining enlightenment in Bodhgaya. Return to Varanasi in the late afternoon, ride on the ghats. Overnight in Varanasi.
Day 13

We drop you off at the airport. End of the trip. Looking forward to a new meeting. Namaste. 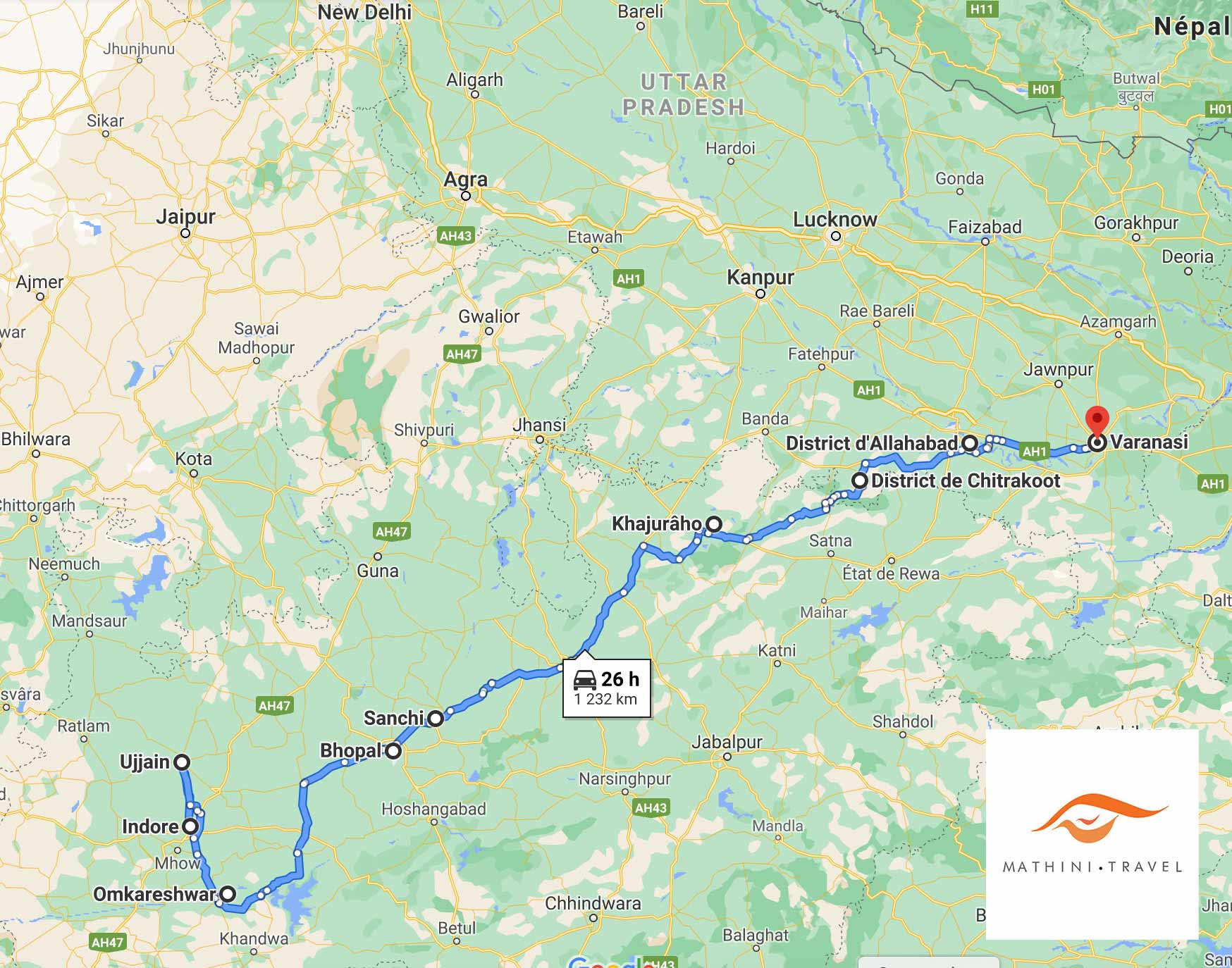