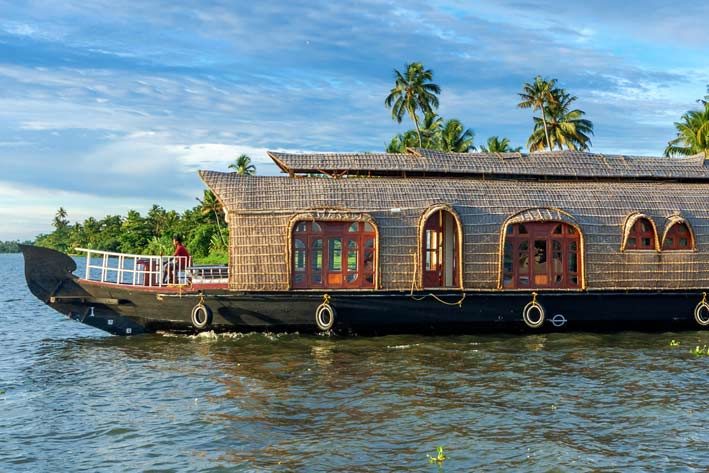 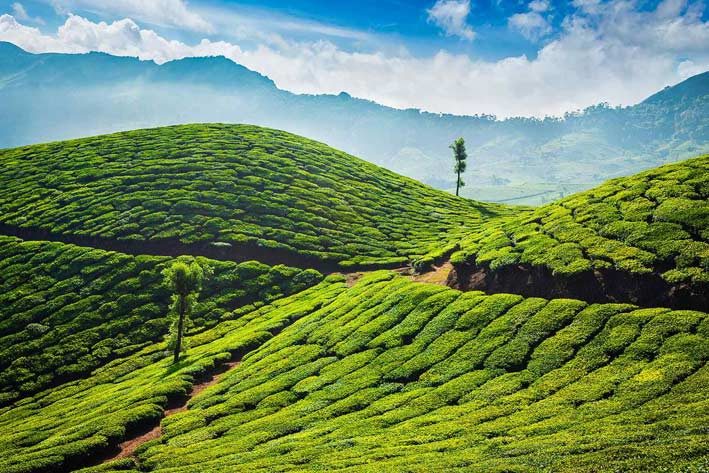 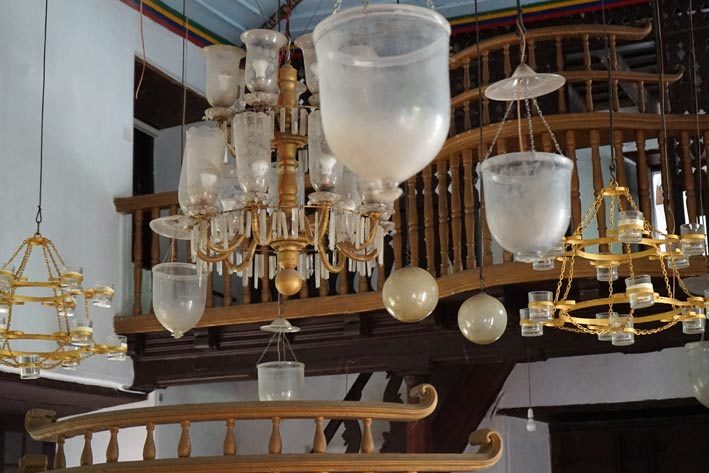 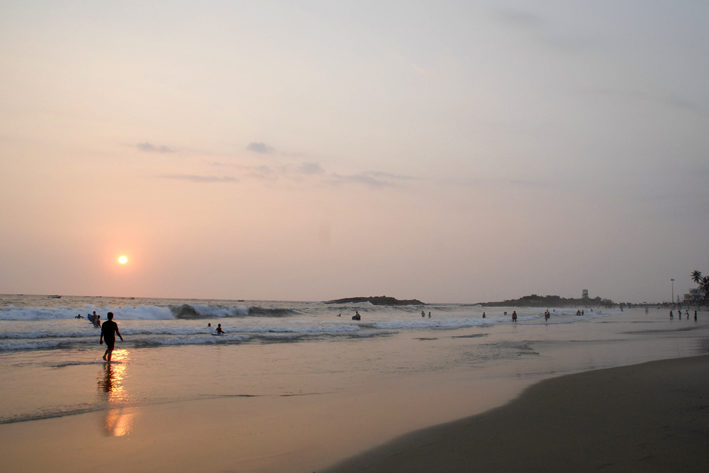 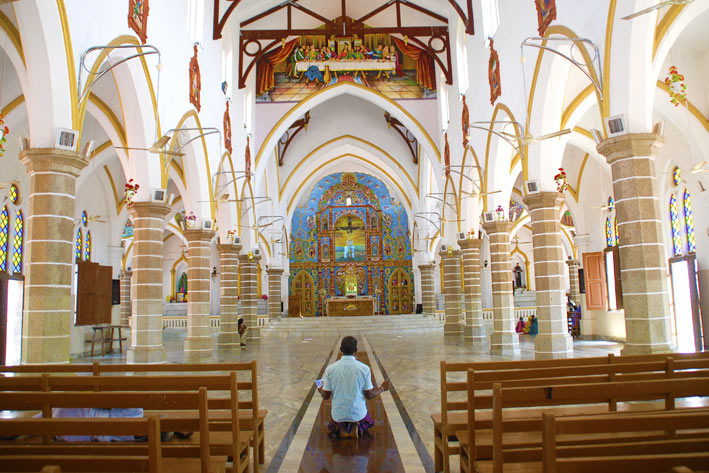 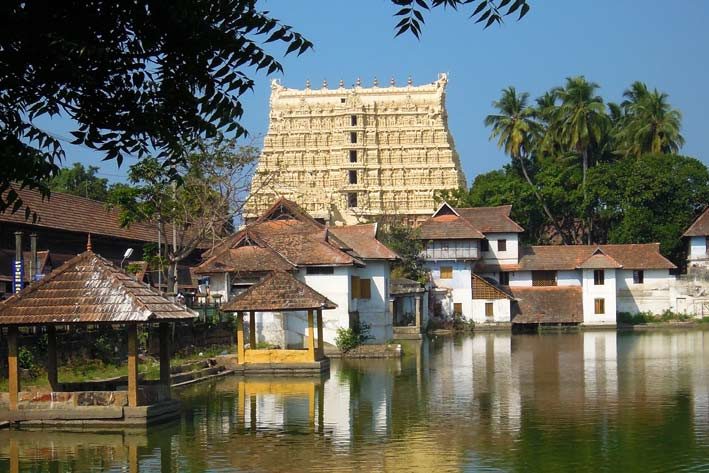 This 10-day trip takes you to the main places of interest in Kerala from Kochi, the eclectic cultural city, to Trivandrum, the city of Lord Ananta, and state capital of Kerala.  Between the two, you will make two relaxing stops, first at a high altitude, in Munnar, the Queen Mountain Resort, then in Alleppey, the land of the lagoons, where you will spend one night in one of the Kettuvalloms, the famous houseboat of Kerala. 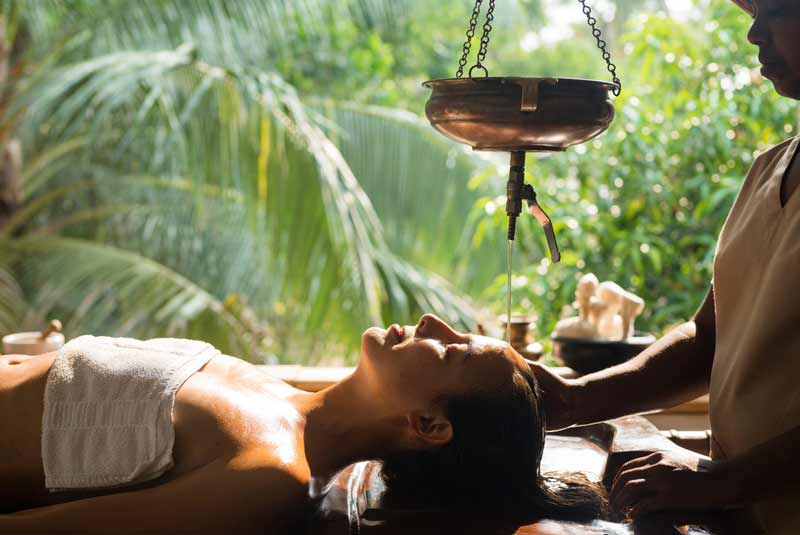 Ayurvedic cure of 7 to 21 days, on the shores of the Lake Ashtamudi, in a vast domain of 4 hectares of lush greenery.  It is led by a doctor with over 30 years of experience and has descended from a family of three generations of Ayurvedic doctors.
from 7 to 21 days 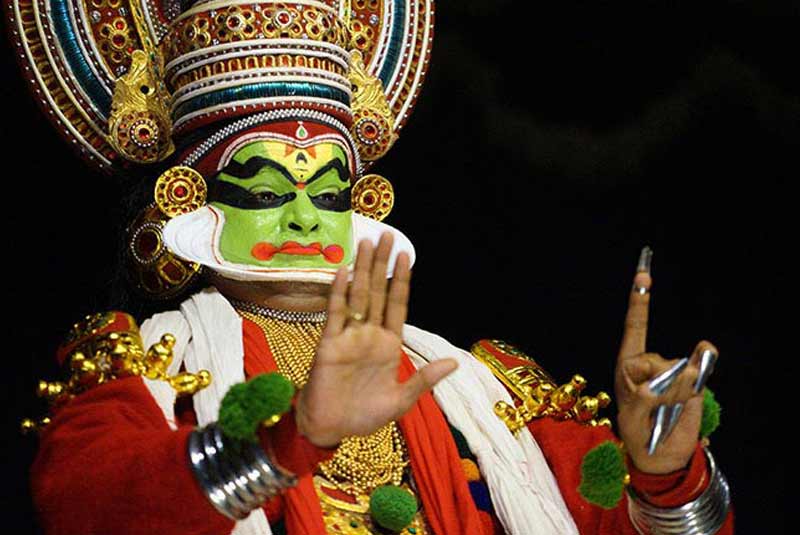 This 10-day journey takes you to the main places of interest of Kerala, from Kochi (Cochin) to Thiruvananthapuram (Trivandrum), via the queen mountain resort of Munnar and the romantic Alleppey, capital of the backwaters.
10 days 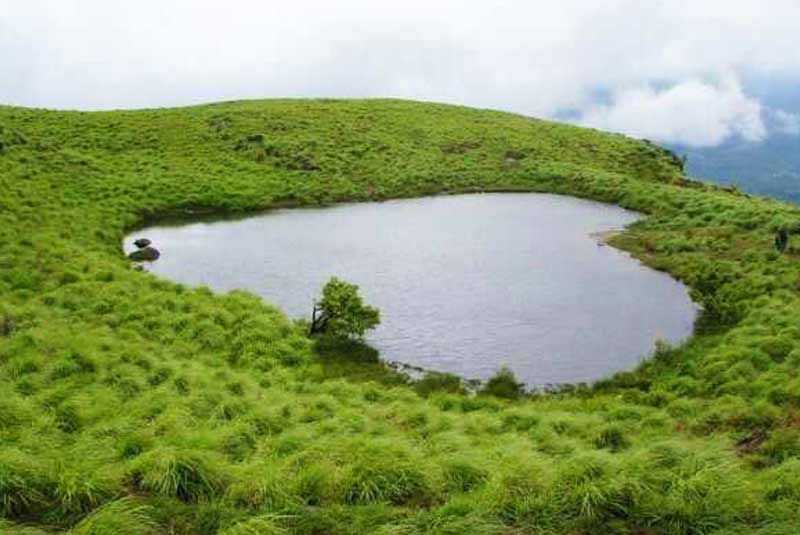 Journey in the green paradises of Kerala, from Trivendrum to the Alleppey backwaters; from Munnar, the queen mountain resort to Kochi, and from Calicut to the jungle of Wayanad, one of Kerala's wildest regions.
14 days 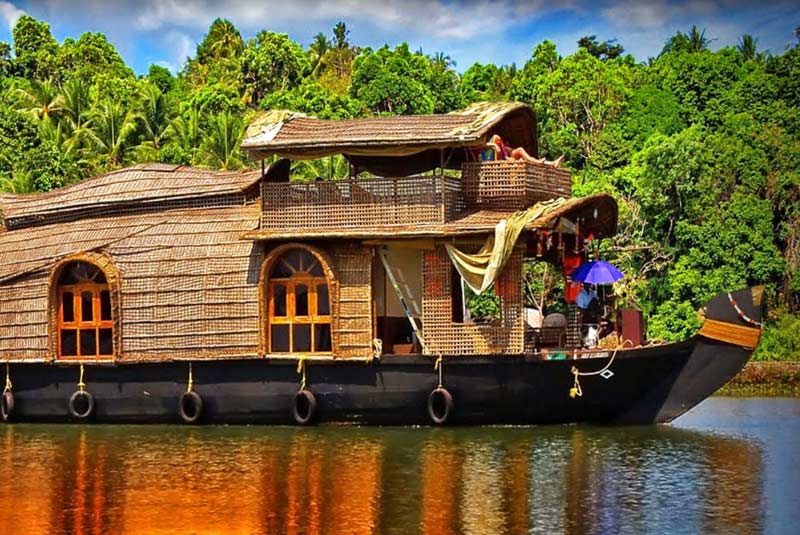 Smooth journey for lovers as well as travellers wishing to have a well-being break during their trip. The tour begins on the shores of Kochi to Munroe Island's Ayurvedic centre via Munnar, Tekkady and Alleppey, the capitale of backwaters.
10 days 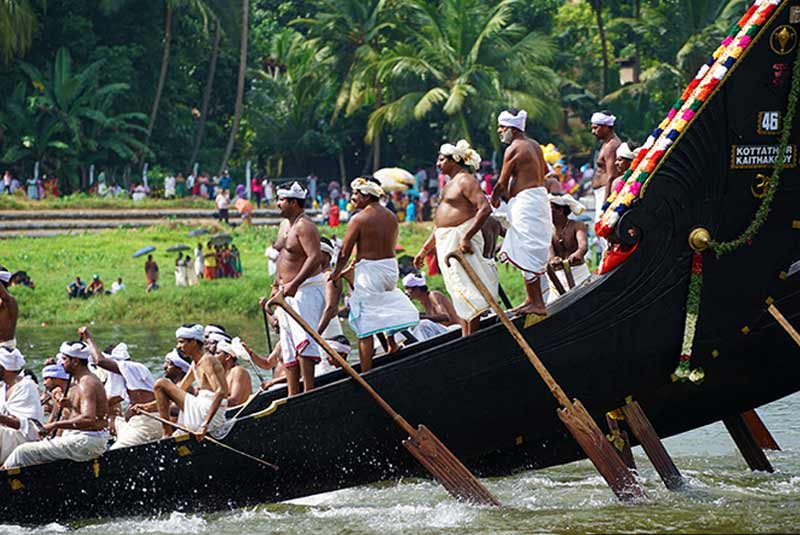 This trip combines the visit of several tourist spots in Kerala (Kochi, Alleppey, Trivandrum) with the colorful festivities of the Onam festival and the fascinating snake-boat race of the village of Aranmula.
10 days 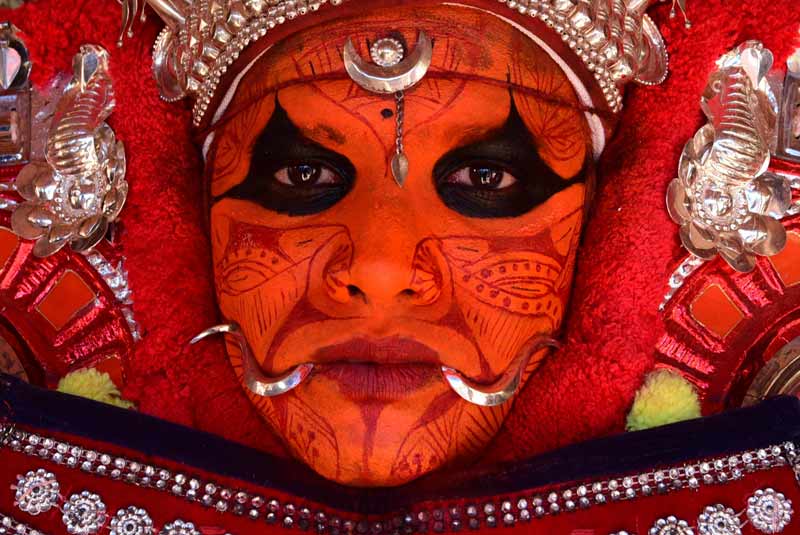 Photo-tour of the ritual art of Theyyam €630

Photo-tour during the performances of Theyyam, in Kannur (Kerala), one of the most spectacular art-ritual forms of India. A unique experience that leaves you with an impression of returning to the roots of ancient India.
5 days
Day 1

We welcome you warmly at the Airport of Kochi and drive you to your hotel. Depending on the time of arrival, we will go for a walk along the port to Fort Kochi famous for its 'cheenavala' orChinese fishing nets. Called 'the gateway to Kerala', Kochi (Cochin) has the eclectic atmosphere of cities that have been exposed to many external influences over time. As a merchant city, it has attracted covetousness since time immemorial: the Arabs, Chinese, British, Dutch and Portuguese have left their mark on the history and development of Kochi. It remains today the commercial and industrial capital of Kerala and is one of the most important port cities on the west coast of India. Overnight in Kochi.
Day 2

We will begin our tour of the city with the visit of the Church of St. Francis, the oldest church built by Europeans in India (1503) where, for a time, Vasco Da Gama was buried. Then we will go to the Mattancherry Palace built in the Nalukettu style, the traditional architecture of Kerala. In the Jewish town, we will visit the Paradesi synagogue, one of seven synagogues of the 'Yehudan Mappila' or Jewish community of Kochi. The Yehudan Mappilar Jews of Kochi formed a prosperous community in Kerala, controlling most of the spice trade. We will end the day with a Kathakali dance show. Overnight in Kochi.
Day 3

Continuation of the visit of Kochi and its surroundings. We will first go to the Hill Palace of Tripunithura, former residence of the royal family of Kochi whose main attraction is the royal crown in gold encrusted with precious stones. We will then visit the Folklore Museum in Ernakulam, a treasure trove highlighting Kerala's rich heritage through its many forms of art. After lunch, we will leave for the peaceful village of Chennamangalam where there are a gem of a synagogue and the Dutch palace Paliam, formerly used as the residence of the 'Paliath Achans', the prime ministers of the kings of Kochi. We will end our visit of Chennamangalam by a typical factory of doti and saris. Back in the evening at Fort Kochi.
Day 4

After breakfast, we drive up to Munnar, one of the most famous mountain resorts of Kerala. Check in at the hotel. In the evening, an Ayurvedic treatment awaits you. Overnight in Munnar.
Day 5

After a good night, we will leave for a tour of the hills of Munnar and its tea plantations. A rather bumpy ride takes us to the Kolukkumalai tea estate, which is one of the highest tea plantations in the world. When going down, we will visit the oldest tea factory in India. Back to the hotel in the late afternoon. Overnight in Munnar.
Day 6

After these two days spent in the tea plantation, we will continue our journey towards the coast, in Alleppey, known as the capital of backwaters, the largest of Kerala. In the afternoon, we will board on a Kettuvallom (traditional houseboat) to sail on the lagoons and spend a romantic night. 'Kettuvalloms' (literally 'rice boats') were once used to transport goods to remote villages. With the advent of roads and ferries, the Kettuvalloms ceased their supply activity and were gradually transformed into hotels on the water. Night aboard a Kettuvallom.
Day 7

We say goodbye to the relaxing lagoons, and leave for Trivandrum, the capital of Kerala. Along the way we make a stop on Papanasam beach in Verkala where tourist and pilgrims gather. The Janardhanaswamy Temple, more than two thousand years old, dedicated to the god Vishnu, stands on the cliffs overlooking the beach. We will also visit the samadhi of the great reformer and philosopher Sri Narayana Guru who fought to end the caste systems in India. Arrival in the late afternoon in Trivandrum. Overnight in Trivandrum.
Day 8

This day is dedicated to the visit of Thiruvananthapuram (Trivandrum), capital of Kerala. In the early morning, we will leave for the beach of Poovar where you can witness the return of the fishermen and the fish auction, a real spectacle in itself. After breakfast, we will go and see the Sri Padmanabhaswam temple (from outside only), then we will visit the Indo-Saracenic-style Napier Museum which houses a rare collection of archaeological and historical artefacts and also contains a art gallery which, exhibits works of the famous Indian painter Raja Ravi Varma and the no less famous Russian painter, Nicholas Roerich. In the afternoon, we will visit the temple of Attukal Bhagavaty dedicated to Goddess Kannaki, an avatar of Parvati. In addition to its rich and colorful Dravidian style architecture, this sanctuary is famous for its annual Attukal Pongala festival where nearly 3 million women gather. Overnight in Trivandrum.
Day 9

After breakfast, we will leave for the coloured harbour of Vizhinjam near Kovalam. The Portuguese and Dutch had established their trading there. In the afternoon, we will drive 50 km further south to visit the Padmanabhapuram Palace, a perfect example of Kerala architecture. Padmanabhapuram is the ancient capital of the kingdom of Travancore. Back to Trivandum. Overnight in Trivandrum.
Day 10

We drop you off at the Trivandrum airport unless you choose to continue the adventure with us! Looking forward to meeting you again.