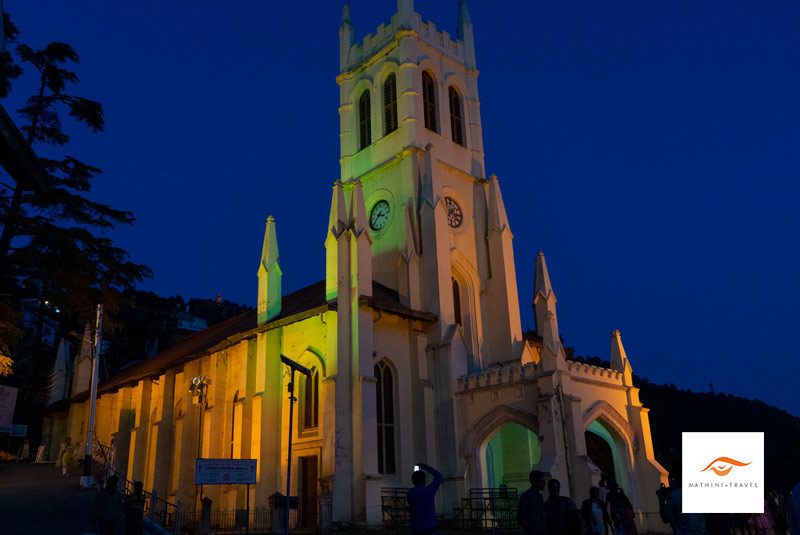 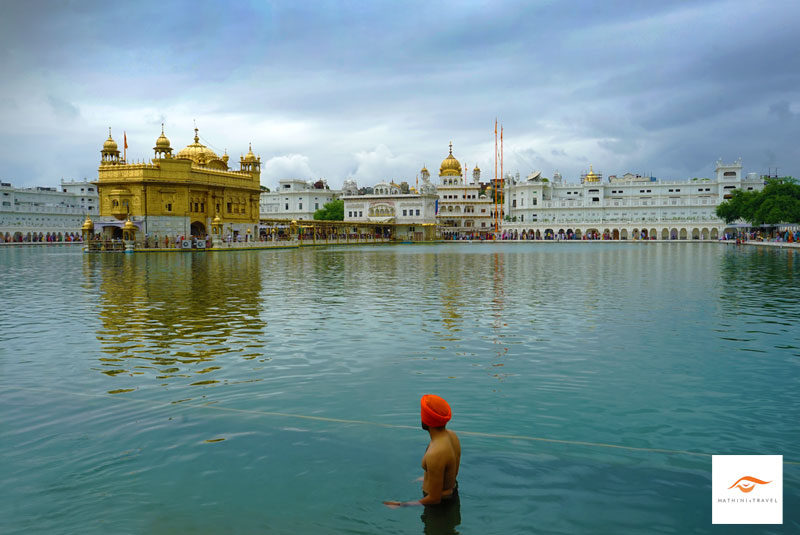 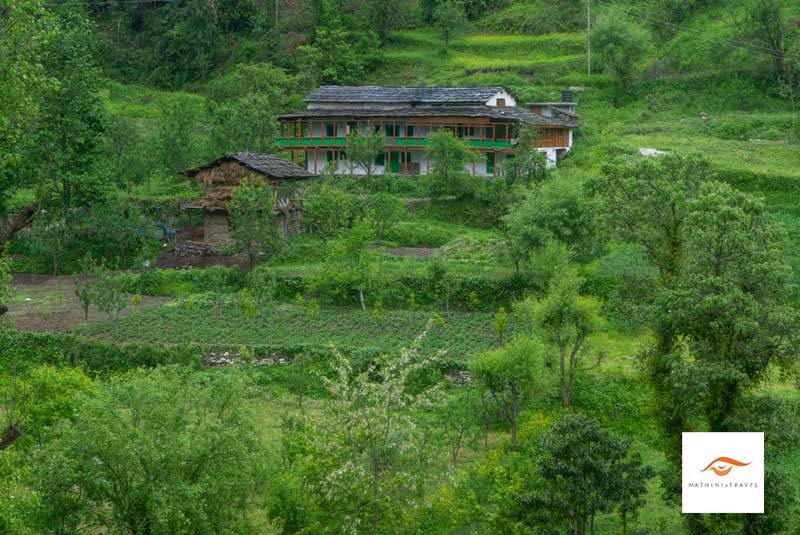 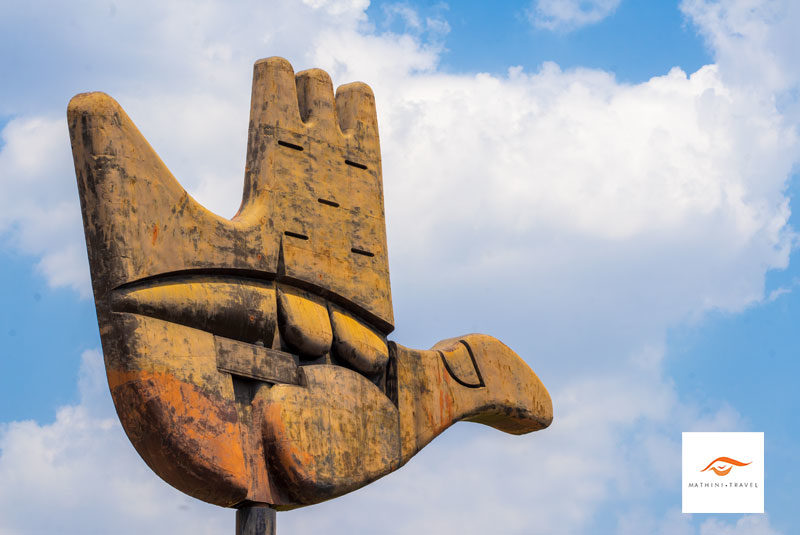 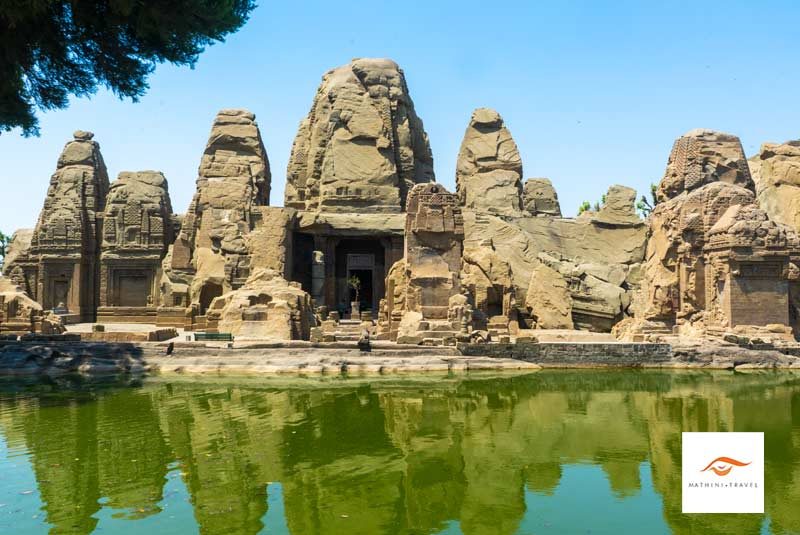 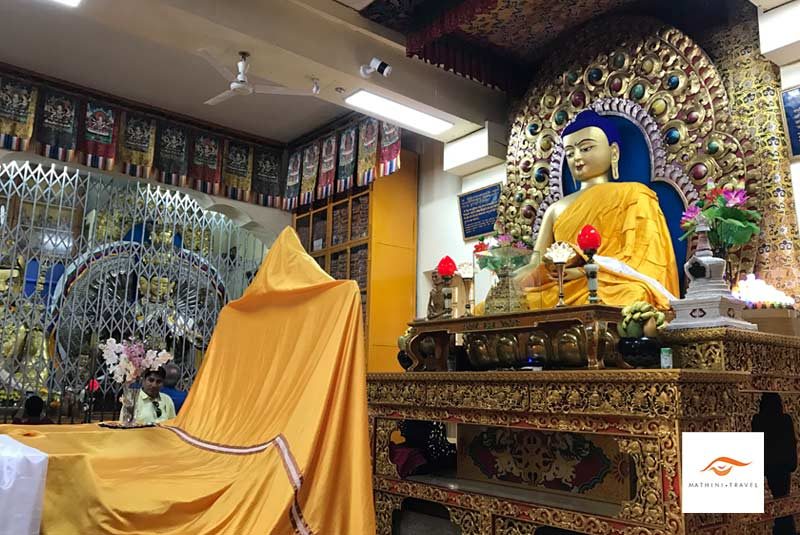 A 12-day journey to the west of Himachal Pradesh from Shimla to Dharamshala (residence of the Dalai Lama) with a stop in Chandigarh (Punjab), city of Le Corbusier, and in Amritsar, city of the Golden Temple of the Sikhs.

Our journey begins in Chandigarh, the first new city of independent India, both Indian territory and common capital of Haryana and Punjab and whose urbanism was planned by the French-Swiss architect Le Corbusier. From Chandigarh, we will head to Shimla, the summer capital of Himachal Pradesh, perched at 2200 m altitude. At the end of the 19th century, the British Raj had chosen Shimla as its favourite summer resort and left behind many ‘British colonial’ buildings that make up much of the charm of this hillside city.

We will then head in the direction of Dharamshala via several stops; first at Jibhi where we will spend a cool night in a beautiful natural setting, then at the Rewalsar lake, a sacred place for Hindus, Sikhs and Buddhists. This is where the Indian teacher Padrasambhava (Guru Rinpoche) went to Tibet and spread the Mahayana Buddhism there.  After this break around the sacred lake, we will arrive in Dharamshala which is famous all over the world for being the residence of the Dalai Lama and the Tibetan government in exile.

The trip will end in Amritsar, under the golden roof of the Sikh temple. One of the most beautiful treks in Himachal Pradesh (moderate to difficult grade) that starts in the cedar forests and green meadows of Kinnaur and ends in the desert lands of the Spiti Valley.
15 days (6 days trek) 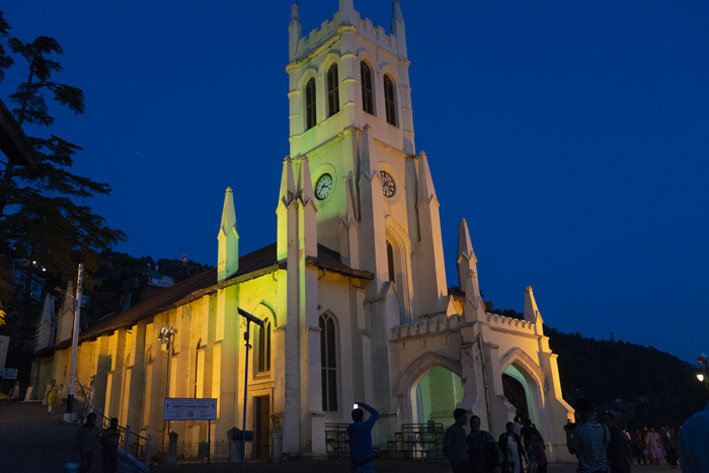 Journey to the west of Himachal Pradesh from Shimla to Dharamshala (residence of the Dalai Lama) with a stop in Chandigarh (Punjab), city of Le Corbusier, and in Amritsar, city of the Golden Temple of the Sikhs.
12 jours 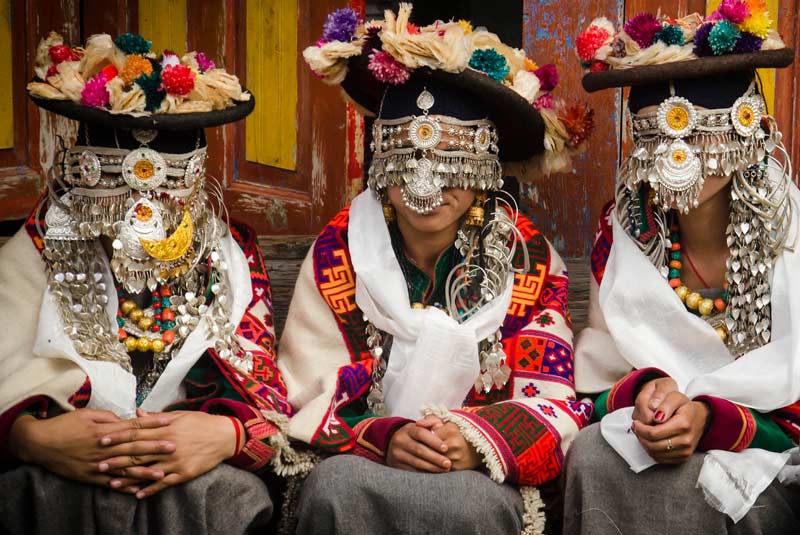 The Kinnaur is one of the few still preserved places in Himachal. A 14-day Journey to meet the 'kinners', their special culture and heritage with, as background, the magnificent landscapes of the Himalayas.
14 days 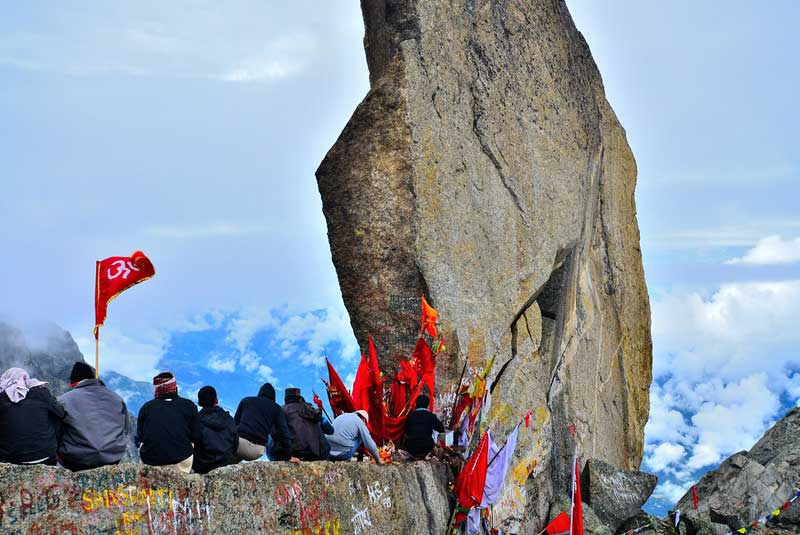 This 7 days tour & trek in Kinnaur of difficult grade will lead you to a rock of 24m at an altitude of 4820m, which is highly venerated by Hindus because it has the form of a lingam, symbol of Lord Shiva.
7 days (3 days of treks) 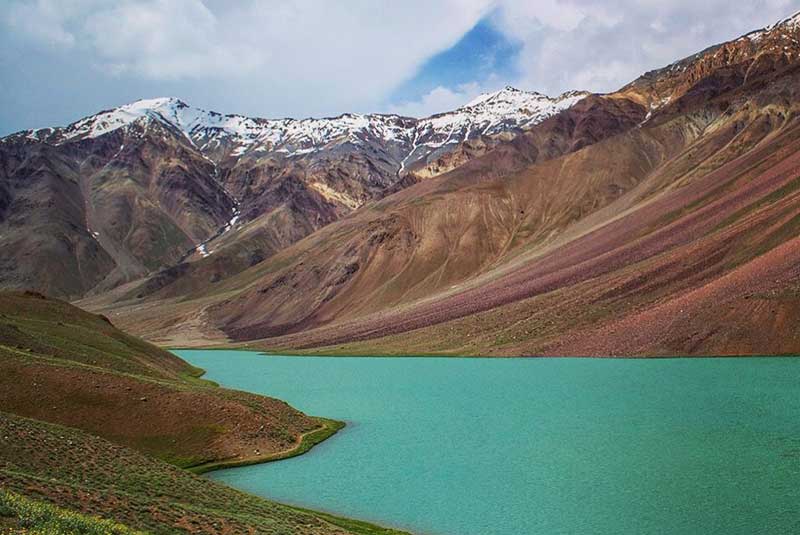 A two-week amazing journey into the Himalayan mountainous desert of the Spiti Valley (Himachal Pradesh) where millennial monasteries perched on rocky outcrops, emerald lakes and breathtaking scenery await you.
12 days 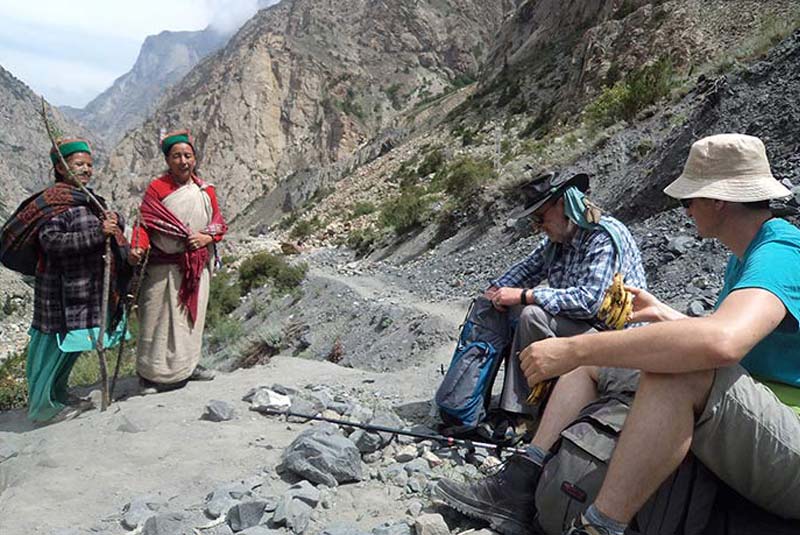 One of the most challenging treks in the Indian Himalayas (35 km) around the sacred Mount Kinner Kailash through the majestic landscapes of the Himalayan Kinnaur Range. Start at the village of Charang and arrival at the village of Chitkul.
10 days (4 days trek)
Day 1

Namaste! We welcome you warmly at Delhi Airport or pick you up at your hotel. From there, we will drive directly to Chandigarh, the Indian city of Le Corbusier. overnight in Chandigarh.
Day 2

Chandigarh was created following the partition of India in 1947 to replace Lahore who became Pakistani. Shimla, the current capital city of Himachal Pradesh, assumed this function from 1947 to 1953 and then Prime Minister Jawaharlal Nehru decided to build a new capital city for Punjab: Chandigarh. In 1966, the state of Haryana was detached from Punjab. Chandigarh, located on the border of the two states, becomes a territory, capital of both Punjab and Haryana. We will start the tour of the city with the amazing Rock Garden, designed by Nek Chand, an official who used his free time to build a garden of sculptures and elegant structures made entirely out of recycled materials. Then we will go to the Le Corbusier Center and visit different buildings created by the Franco-Swiss architect. Ovenight in Chandigarh.
Day 3

Departure for Shimla, the summer capital of Himachal Pradesh, a city with British architecture and one of the most popular mountain resorts during the summer period. After checking in at your hotel, we will walk on the 'ridge', a large bustling esplanade, and on the famous 'Mall road', a long pedestrian street lined with shops of all kinds. We will also stroll through the 'lower bazaar', which is a typically Indian market with stalls of spices and wooden buildings crumbling under the weight of time. Overnight in Shimla.
Day 4

We will continue our visit of Shimla by the Jakhou temple, the most famous Hindu shrine of the city. Dedicated to Hanuman, the monkey god, he stands atop the Jakhou hill at an altitude of 2455 m and his 33 m high statue is visible from a distance; it is one of the greatest effigies of the god Hanuman in the world. Going down, we will visit the Church of Christ which is part of the postcard of Shimla. The stained glass windows are particularly remarkable. In the afternoon, we will pass the Shimla Town Hall, which has a beautiful half-timbered Tudor architecture and in front of the railway company building, a fine example of British architecture with a cast iron and steel structure. beautiful spiral staircases. We will end the visit of Shimla by the Viceregal Lodge, a mansion of classical and Gothic architecture, which was once the summer residence of the British Viceroy of India. Overnight in Shimla.
Day 5

We will leave Shimla and slowly walk north with a cool break in the charming village of Jibhi. Lunch at the hotel with local products; perhaps you will be tempted by fried saffron shoots (Lingdu Ki Sabji), a delicious dish typical of the Himalayan areas. In the afternoon, walk in the village with pretty wooden houses. Overnight at Jibhi.
Day 6

We will continue our journey north and we will stop for one night at Rewalsar Lake, sacred place for both Hindus, Sikhs and Buddhists. We will walk around the lake and visit different places of worship. The 12-meter tall Guru Riponche statue overlooking the lake is in itself a beautiful attraction. Overnight at Rewalsar Lake.
Day 7

Departure for Dharamshala, Mecca of Buddhism, our last stop in Himachal Pradesh. Along the way, we will stop at the Baijnath temple, dating from the beginning of the 13th century, which presents a beautiful Nagara-style architecture with finely carved facades. Arrive in Dharamshala at the end of the day. The history of the city begins on March 17, 1959, when Tenzin Gyatso, the current Dalai Lama flees Tibet following the Chinese invasion and takes refuge in Dharamshala, where he creates the Tibetan government in exile. McLeod Ganj or 'Upper Dharamshala' located 10 km above Dharamshala becomes the official residence of the Dalai Lama and the haven of thousands of Tibetans. We will move to McLeod Ganj. In the evening, we will stroll through the streets of the city and go for dinner in a typical Tibetan restaurant. Overnight at McLeod Ganj.
Day 8

Visit of McLeod Ganj and Dharamshala

In the morning, we will go to visit the residence of the Dalai Lama called 'Tsug La Khang', consisting of a monastery (Namgyal Monastery), several temples and a museum. Entering the complex, we hear shouts of voice: it is the famous verbal jousting of the monks who debate Buddhist philosophy. Even if the language is foreign, these debates are always interesting to observe. In the afternoon, we will visit the Dharamshala Tibetan Bookstore located 10 km down McLeod and other places of interest like the Church of Saint John and the village of Naddi which offers a nice panorama of the Dhauladhar mountain range. Overnight at McLeod Ganj.
Day 9

The Kangra Valley is one of the most interesting places around Dharamshala. We will start by visiting Fort Kangra, one of the oldest in India; its origins go back to the 4th century of our era. It was the fiefdom of the Katochs rulers. You have to reach the top to admire the Hindu temples of Lakshmi Narayana and Ambika Devi and a Jain temple that contains the original idol of Mahavira, the 24th and last of the tirthankaras (Jain saints). But the highlight of the show in Kangra is the set of 8th century Masroor temples carved into a single monolithic; this style of architecture, Gupta style, is a perfect testimony of the beginnings of rock structures in India like those of Mahabalipuram, Ajanta and Ellora. Return to McLeod Ganj via the hot springs of Tatwani coming out of a small temple dedicated to Shiva. Sulphide water is supposed to have healing properties. Overnight at McLeod Ganj.
Day 10

We say goodbye to Himachal Pradesh to return to Punjab. There we will take a break in Amritsar, the golden temple of the Sikhs. Amritsar (nectar of immortality) is also known as 'Guru Nagri', the city of 'gurus', in reference to the spiritual leaders of the Sikh religion. 'Guru' means 'a person who brings you from darkness to light' in Sanskrit. This term has been widely misused in the West because of the problem of sects. Arrival at the hotel, rest. Night in Amritsar.
Day 11

Amritsar, the golden city of the Sikhs

We will start the visit of Amritsar by the famous temple of the Sikhs 'Harmandir Sahib', nicknamed also the 'golden temple' because of its roof gilded with fine gold. Harmandir Sahib is the holiest of the Sikh Gurdwara. It contains the 'Guru Granth Sahibp', the holy book of the Sikhs which is placed on the only altar of the golden temple, which is entirely dedicated to him. He is revered as a master of living wisdom and recognized as such as the eleventh guru of the Sikh faith. The texts it contains are called 'shabads', mystical poems intended to be sung. Located in the vicinity of the Golden Temple, Jallianwala Bagh is a public garden that is home to a monument of national significance. Established in 1951 by the Indian government, it commemorates the massacre of innocents by the British occupation forces on April 13, 1919. We will continue the tour of the city with the Durgiana temple dedicated to the warrior goddess Durga, resembling there mistaken for the golden temple. At the end of the day, we will go to Wagah, a village near which the Radcliffe line, the line of demarcation of the Indo-Pakistan border is held. At the time of independence in 1947, migrants from Indian regions entered through this border. Every evening before sunset, since 1959, the flag-breaking ceremony of the Border Security Force and the Pakistan Rangers took place. The exercise is characterized by a choreographed military parade of soldiers from both sides, alternating not complex and demonstrations of strength. Night in Amritsar.
Day 12

Return to Delhi, end of the trip. Looking forward to meeting you again. Namaste. 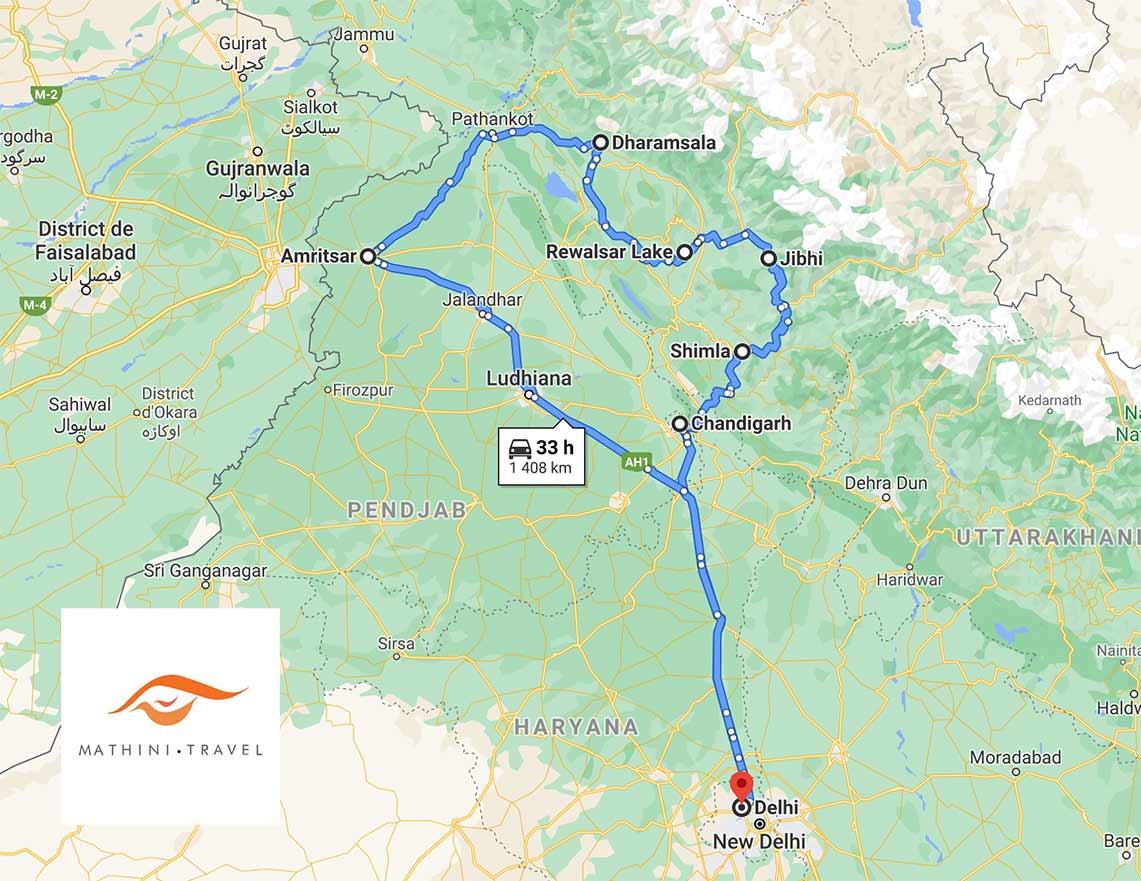